Five days of discussions opened yesterday 30 September, 2019 at the Yaounde Conference Centre to examine and propose concrete solutions to the crisis that has for the past three years distorted normal life in the North West and South West Regions. At the start of the demands by teachers’ trade unions and Common Law lawyers in 2016, people thought it was just a problem concerning both regions. But over the past years, the ramifications throughout the national territory have become obvious to everyone. The differences, frustrations, and pent-up emotions that the populations of the North West and South West Regions have sought to express started simmering across the country with tales of horror which today require that the entire nation should look inward. The collective conscience of the current generation of leadership, opinion leaders, religious authorities, civil society activists and so on, has the historic role of writing another page in the evolution of Cameroon through the decisions that will be taken at the end of the ongoing Major National Dialogue which ends on 4 October 2019.

Prime Minister, Head of Government, Chief Dr Joseph Dion Ngute while opening the discussions yesterday in Yaounde recalled the challenges that the horrors of war now pose to Cameroon as a whole, saying those being called to participate in the dialogue must not afford to fail Cameroonians and the world. The massive exodus of the civilian population in the affected regions to other parts of the country and even abroad has been pathetic. The frank disclosures by some of the ex-combatants at the opening ceremony spoke volumes as far as the expectations of the people are concerned. Those who have tasted the bitter consequences of the fighting since the situation in both regions degenerated have been testifying and urging that things should return to normal. A generalised disruption of business activities and near total breakdown in law and order are some of the hurdles that have characterised life in the South West and North West Regions. Faced with such a situation, the Head of State called for a national dialogue in a solemn address to the nation on 10 September 2019. The event is now on and the clear message is that a country as diverse as Cameroon cannot afford to sacrifice the wellbeing of citizens and generations to come on the altar of ethnicity, nepotism and political sycophancy. While there is time for people to quarrel, there must be time to sit down and iron out whatever differences that tore the people apart.

As Chair of the dialogue, Prime Minister Joseph Dion Ngute put the question so clearly yesterday by asking the participants if they will want to betray the sacrifices that the founders of the nation made to ensure that Cameroon is a land of milk and honey. In addition, it would be unacceptable for history to retain that Cameroonians have been unable to tackle their common problems due to egocentric tendencies. The presence of people from all parts of the country at the Yaounde Conference Centre yesterday during the official opening ceremony ought to be translated at the end of the week through concrete proposals capable of bringing back sanity to the entire country, particularly through stability in the South West and North West Regions. Cameroonians from across the board clamoured for dialogue and finally the opportunity has come for everyone concerned to steer clear of demagogy and face the issues in such a satisfactory manner such that sons and daughters of this country can live in peace and harmony.

Such decisions can simply come through the ability of citizens of this country to learn to accept each other for who they are rather than struggle to ensure a complete transformation of one another which may all boil down to producing pseudo people.  The diversity in Cameroon can only be transformed into an asset in order to enable the country tap from the rich heritage that every region or ethnic group and other components has, to build a strong and harmonious nation. 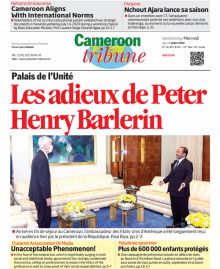