The only thing that is constant is change and when people fail to take initiative especially when in leadership position, then they are planning to fail. With several ideological differences that keep emerging and some giving rise to violent confrontations among communities, most world leaders are conscious of the need to seek open and new avenues to conflict resolution. Most clashes are no longer limited to cultural identities, political adversities or economic crisis and other conventional hurdles. Globalisation seems to have ushered in violent nationalism, transformed the face of terrorism and cyber criminality all combine to keep world leaders on their toes.
Faced with such growing challenges, French President Emmanuel Macron who thinks that humanity has not ensured sustainable peace after World War II and that new forms of brutalities keep cropping up conceived the Paris Peace Forum and sought the adherence of those who can make the idea hit the road running. Thus, if President Paul Biya like other world leaders at the second PPF argued that the United Nations Organisation should be reformed to take into consideration countries of the South, it is not just a trendy proposal. Over the years, some Super Powers have lived under the illusion that that they hold the key to all the problems of mankind. Unfortunately, the new forms of criminality that the world is witnessing have spared no nation or individual.
Countries facing extremism, terrorism, egocentric nationalism, nefarious consequences of climate change and other negativities are found in all continents of the world. The number of calamities that are spotlighted each day across the world at times present an apocalyptic image of human existence. As such, it is no longer possible to settle for a do-it-alone approach in tackling the challenges that different communities face across the globe.
In some situations, people have thought that democracy will come to make them better and happier. Even the advent of the Information and communication technologies (ICTs) has not always given rise to acceptable human conditions. Demographic fears, migratory waves, wars, refugee influx, and governance malpractices have persisted in several parts of the world and when some world leaders claim to be able to make their people happy, the reality is often much different. For instance, the second PPF is holding 30 years after the collapse of the Berlin Wall. Yet, the promises that the world expected from such a historic moment are still not obvious to many. Scary situations like arms race have not seized to exist, the trade war between the People’s Republic of China and the United State of America is far from over and the new world order remains so polarised.
The UNO that has over the years served as the major stabilising force among world powers seems to be so overwhelmed that some people even question its relevance. At times, the views purported to be from the international community have not often carried enough weight to change certain tides. In such disturbing circumstances, the solution may not be to stay idle, but rather to look for more concrete solutions that can match the growing challenges. It is when situations are tight that the expression of great men being born out of adversity can have its full meaning and those who burry their heads in the sand in times of trouble may only wake up to realise that the scourging sun has burnt down everything they counted on.
It is therefore understandable that the PPF easily attracted all sheds of opinion leaders who are conscious of the need for a better world and who are ready to seek innovative solutions to the growing challenges. The fact that they met and agreed to keep meeting again can already be a good step in the right direction. 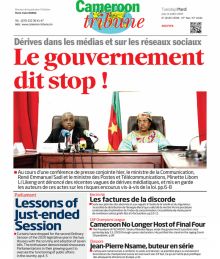